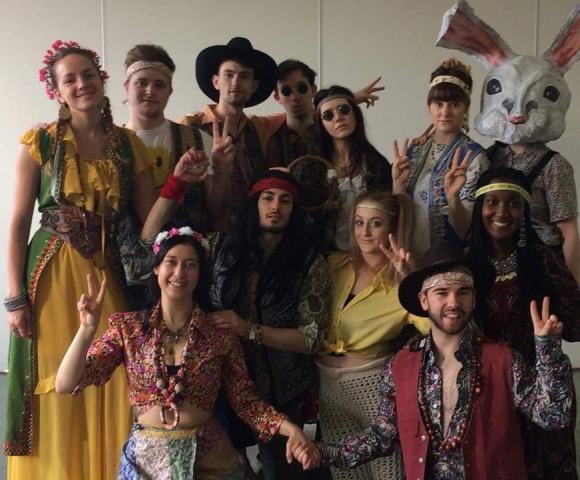 Welcome to San Francisco and a hippy inspired version of the fancy dress shop in Mr Benn. Try something on. No, no, really, you must – it’s immersive after all. Unfortunately, as I am only one for dressing up when in character or for someone’s birthday (who doesn’t love a good Bob the Builder themed 20th), this wasn’t the best start for me. But, still go with the flow, you’re in San Francisco after all…

Daydream Believers is an immersive piece of physical theatre inspired by the summer of love 1967. It is a love in (of sorts) crafted in just five days by Tmesis Theatre Training Company. Once you’re kitted out with a 60’s inspired outfit or awkward accessory, you are invited into the love bubble filled with a wealth of characters who are out for peace and a good time. They want to make you feel welcome and to a degree that is achieved. Though in my case, a multitude of comments about my hair (even if they are ‘positive’) is not welcoming, it is othering.

Despite not getting off to the best start, this piece did take its audience on a journey with a great soundtrack and a happy, trippy colour palette to match. The psychedelic trance complete with a looming white rabbit is certainly a memorable moment. Interestingly, this showed similarities to moments in Rosie Kay’s MK Ultra crossed with the music video of Get Down by Groove Armada. This along with the moment where one ensemble member places a flower in the gun of another give this piece an originality and honesty that were found in the moments were the ensemble felt at their most present.

The space that this piece was set in was not the most accessible nor the most comfortable however, the company made every effort to distract you from the fact that you were sat on an uncomfortable step was certainly a positive on their part. However, at times, the immersive elements seemed a little off target. For example, all audience members but myself and the woman sitting next to me were offered a ‘token’ of LSD to take them on what we will refer to as ‘the white rabbit trip’. If you going to the effort of including most audience members when your audience is small, you may as well go the whole way and commit fully. Or alternatively, pick out a select few. A little more thought maybe was needed here.

I feel that devised work grows with each performance, as an ensemble grows into itself. So, by Saturday, this piece will be very different to what I have experienced. It’s the sort of theatre that you want to see again to observe how it has grown. And I do believe that this is a piece of theatre with great potential and a talented cast. So if you’re in Liverpool on Saturday, do pop in and see this as, I suspect by then it will have grown into something quite exciting.

Following this show, I couldn’t help thinking about the lack of diversity in the cast but, on a wider scale, the lack of diversity in Physical Fest. I came away from Liverpool thinking: why is physical theatre so white? That is not a question that can be answered in a small space nor is this review the place for that exploration. However, it will be something that I explore in a later post.

Verdict: Tmesis Theatre Training Company have the bones of a good show here. Special shout out to Lauren Whitter, Grace Gallagher and Ellie Woodhouse, who gave striking and emotive performances. An interesting devised piece of theatre with potential to be brilliant, once it’s fully grown and had time to breathe.