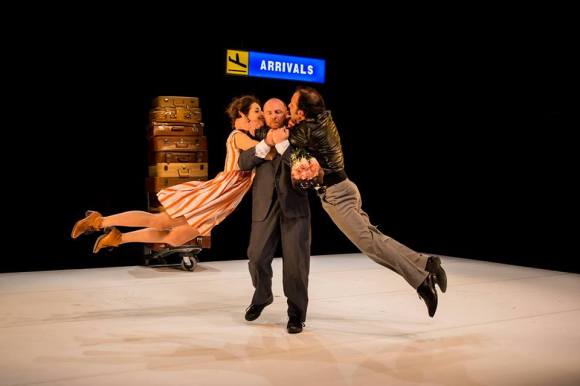 Three passengers to be, waiting in the departures lounge. One hyper-synchronised couple. One lone man. A seat giving up on its join and tipping said man onto the floor. An awkward yet valiant attempt to fix said seat back on to the others. A decision to re-attach seat back to front. A need to be a sheep and mirror the seated couple. And so, we begin.

Jetlag is an almost language-free, physical and visual exploration of airport etiquette, loneliness, missing mothers and the dreaded Third Wheel syndrome. Through a blend of circus, gesture and dance theatre, Chaliwaté an unusual yet honest exploration of what it means to be alone and to be displaced from the world around you. We are invited to be a fly on the wall and observe a man who is lost and searching for some sort of affection but, most importantly, validation. It is the moments of silence and stillness within this piece that really make this piece relateable. We are reminded of times in our own lives when we have felt completely alone despite being in the presence of others. And there is something quite cathartic about having this time to reflect on this state both as an individual and collectively as an audience.

Jetlag is a very humorous piece of theatre that offers its audience tableaux and moments that would easily put Mr Bean to shame. Gags are well timed and delivered playfully, often using changes of lighting and circus performance to provide the audience with a mish-mashed palette of experiences that left many of the audience laughing aloud. Chaliwaté successfully delivered an array of quintessentially “British problems” with an original twist highlighting that awkwardly asking people to stand up whilst you pass them and struggling to establish use of your arm rest are in fact just general awkward people problems. And to top this off, whilst the couple are sleeping on the flight and the man tries to climb over them, they resemble Grant Wood’s American Gothic being exposed to the joys of flying by Ryan Air. Absolute comedy gold!

The attention to detail with the physicality of this piece makes it an engaging and exciting spectacle for its audience. Each gesture is nuanced and delivered with intent and in a piece that doesn’t depend on language this is crucial for it to work. Through embraces, caresses, lifts, the folding of clothes and beautiful unison phrases, we are successfully taken on a journey with these lovable yet slightly odd characters.

Verdict: Jetlag is a captivating piece of physical theatre that could easily be delivered in complete silence, as the cast are able to bring humour, emotion and a truthfulness to their performance. This has certainly been an insightful experience for developing my own practice. Definitely worth seeing!