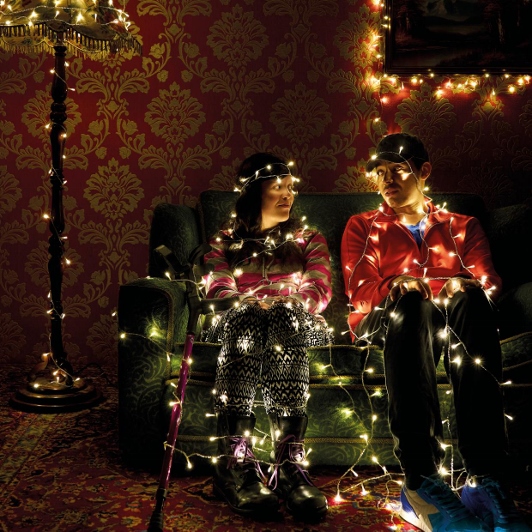 A concrete-esque set up of three benches and an arch way. The labels ’44 Feltons’, ‘Birch Green’, ‘Skelmersdale’ – Dent’s address. A pair of fake uggs and a cardie. A woman (Dent) emerges from behind the the arch way wearing odd socks, tie-dye leggings and layered tops with a mug of what could be tea, coffee or a beverage of multiple of descriptions. Shaun opens the door. And here we have our Cosmic Scallies.

Cosmic Scallies is as much about being disabled and being working class, as it is about the depths of friendship and how are experiences inform who we become but are not the entirety of who we are. These complex and important themes are accompanied by banter about posh pubs and their shit names, the adjectival alliterative names we affectionately give those from our ends and an ode to the best snacks you can get from the corner shop for less than a quid.

We are taken on a journey with Dent and Shaun. A journey that begins with Dent calling up a handy man to remove her late mother’s belongs from her house only for her long estranged school mate Shaun to turn up at the door. The two reminisce on old times, take the piss out of each other, argue over the severity of Dent’s disability and remember why they drifted away from each other in the first place. As the two attempt to pick up Dent’s medication and she is faced with the usual obstacle course posed to the chronically ill (if you follow me on social media, you’ll have experienced my rants about unsigned prescriptions and unavailable meds), Dent is faced with a decision of continually insisting she can do everything for herself or allowing Shaun to take the prescription and resolve the situation for her. In her reluctance and Shaun’s help focused insistence, we journey back in time to their school years. We hear of Shaun’s neglect-fueled childhood and loneliness in primary school and Dent’s experience of bullying in high school, often fueled by Shaun.

But what moved me most about this was the final scene between Dent and Shaun. Dent is in severe pain and her electric has gone. Shaun takes her final tenner to buy them a couple of treats and, returns with some Space Radars, Kit Kats, Freddos and some multicoloured fairy lights – batteries thrown in. And watching the two of them sitting, draped in these lights with their snacks, reflecting on life reminded me of what really matters. The last time I had a rough patch PTSD wise, one of my friends sat in my bed with me and at stupid o’clock suggested that we sit and meditate together. I think he did a good job. I struggled. But it’s the thought that counts and the thought here is that friendship and mattering to each other transcends being popular, having a few bob and feeling okay. Mattering is personal and it’s special. And that uniqueness and truth is something that this friendship and this play truly embody.

What Jackie has successfully achieved is a story crafted with honesty and bluntness. This is a play that turns theatre on its overly middle class head and redefines what makes a story worth telling. Cosmic Scallies is very real. It is a reflection of a life that many people live and if this shocks audiences, they’ve clearly not come up from their slumbers for quite some time. I imagine this play will be described as gritty and hard-hitting because as soon as anything differs from Hamlet or Jane Eyre, all adjectival hell breaks loose. But, what I am going to conclude with is that this play is genuine. A genuine piece of theatre about people who do matter and whose stories deserve the same recognition as those that are more palatable and/or Instagram friendly.

Verdict: Cosmic Scallies really is a special offering among the mounds of mediocre theatre that gets chucked at us daily. It is the hidden gem at a car boot that makes your Sunday afternoon. But, most importantly, it is truly relateable for the skint, the disabled, the struggling and the hopeful. An important play that almost got a tear out of me – theatre tapping into my feelings at its best.