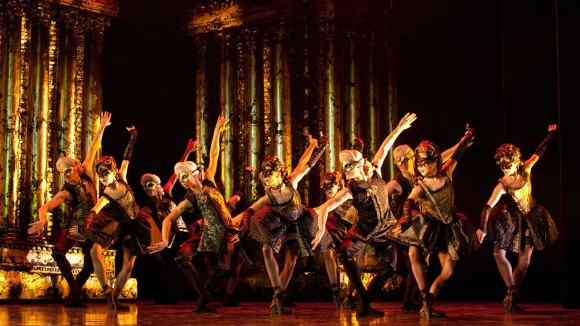 Opulent smoke and a procession of six figures travel with intent across the stage, surrounded by three towering ornate pillars. Then, six hooded men appear and engage in energised and powerful physicality that has you leaning in just to be ever more captivated by a sweeping array of small intricate to grand dominating movements. This ensemble give us a flavour of the beauty that is to unfold before us.

Casanova has become the social pseudonym of the womanisers and sex addicts of the modern world. But, Northern Ballet’s Casanova crafted by Kenneth Tindall invites us to take a look through a magnifying glass at an intricate and captivating narrative of the man behind the debauchery. This elegant, full length work inspired by Casanova’s memoirs explores the power, anguish, knowledge and of course, sex that dominated his many lives and delivers a vulnerable unveiling of who the real Casanova was.

On a mesmerising journey from Venice to Versailles, we see Casanova’s many versions of himself as an alchemist, violinist, writer and cleric. Among these pursuits, we see him tempt and be tempted by an array of women and take a particular fancy to a woman who has disguised herself as a man. This one is different. This becomes less about sex and more about passion and feeling.

The ensemble move with intent, diligence and passion, leaving it near impossible for you to take in everything that is happening simultaneously. The movements are captivating and give onlookers a true appreciation for the potential and possibilities of the human body. Each element is flawless in its execution and every dancer gives a distinct emotional performance to depict their character. Tableaux and trio performances convey ritualistic and sexual intent with both a tasteful and truthful aesthetic.

Christopher Oram’s awe-inspiring costume design transport us to the 1700’s in a spectacular masquerade of exquisite fabrics and silhouettes. The moving nature of the set allows us to journey with Casanova to his differing residencies and gives this tale a natural meander. But, it is the three pillars illuminated by Alastair West’s lighting design that really take this production from the Lyric Theatre stage to an entire world of its own. We see the dancers reflections on the speckled mirrored panes and the fluidity of their movements paints the most beautiful caricatures onto these panels. It is this haze of colours alongside this passionate tale that truly take us into the realm of Giacomo Casanova.

Verdict: Words cannot do this stunning production justice: this is a dance to be seen and experienced. Truly exceptional. 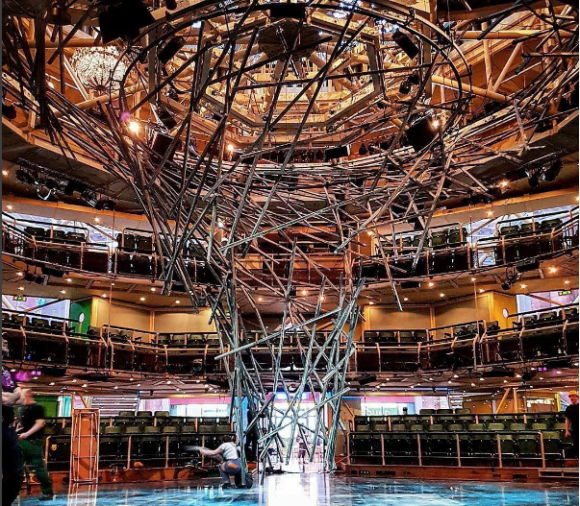 I’m not a big fan of Shakespeare or Classics, but this was a great piece of Saturday afternoon theatre that really went to town with re-imagining Shakespeare and making it more palatable to the modern audience. To my surprise, I enjoyed myself. This is a rare occurrence so I will use this post to celebrate that.

But let’s start at the very beginning (a very good place to start, when you read you… stop) and explain why I don’t really buy old Shakey. Shakespeare has been done to death and even in death, he has not parted us. He’s still grasping on for dear life, like when Victor puts the ring on the branch in Corpse Bride and it turns out to be Emily’s finger and so she rises from the dead to wed Victor. Yeah, that sums up Shakespeare quite well.

Chuck in a trolley draped in 90’s Christmas tree fairy lights, a traffic cone, a folding bicycle, an electric guitar and some next level high-vis Lycra, and you’ve got yourself a wildly funny piece of new age Shakespeare. Sir Toby’s late night party piece with Sir Andrew is enough to rival any post student night out after party (Poly v Posh eat your heart out). But, the party truly starts when Feste walks in. Played by the charming and engaging Kate O’Donnell, Feste is a loveable, inquisitive jester who makes us laugh and reflect throughout the piece. She also takes a moment to bond with the audience following the interval and finishes the play with a song that resembled what I imagine the Shakespearean version of Cabaret to be. O’Donnell’s cabaret background and ability to bring an audience in made her the perfect choice for this role. Plus her own experiences as a transgender woman, added to the emotional truth that really came through in the final song.

The story within this play is good, but it is all of the production aspects of this adaptation that really push it into the great production realm. It’s rare that you can go to see a main house production and see such a diverse cast. The casting of Faith Omole as Viola was an excellent choice, she brought wit, charm and vulnerability to the role. She gave Viola and Cesario their individual nuances, and really made us believe the depths of her love for her master, Orsino.  Moreover, it was good to see a dark skinned black woman in a challenging, leading role. Colour-brave casting isn’t a new feat for the Royal Exchange who staged King Lear last year, starring Don Warrington and an equally diverse cast.

Mina Anwar (Maria) and Kate Kennedy (Olivia) also gave us charismatic and humorous performances. Comedy gold struck when Olivia requested that Maria cover her mistress’ face, but due to their stark height difference, she has to jump to comply. Anwar and Kennedy pull the most distinctive and story-filled facial expressions throughout the play that it is hard to take your eyes off them.

Harry Atwell plays a gaudy yet loveable fool in love (or status), Sir Andrew, who gives us what can only be described as a ginger gandalf leaping over 2 for 1 Primark suitcases and a pitiful attempt at boxing – very much like sending Daffy Duck to compete in Cagey Joe’s boxing ring, with no Bugsy Malone in sight… unless you count Malvolio sporting a high-vis yellow get up, to appease Olivia. Absolutely hilarious from start to finish!

And now of course, for the set. Leslie Travers’ designed the amazing structure pictured above, which I will refer to as ‘Malvolio’s Cage’. When a picture of Malvolio’s Cage was posted on the Royal Exchange’s instagram, I was so taken by its architecture that I concluded I had to see the play because I needed to know what role this creation could be playing in it – it is the 15th cast member. When the structure lowers to centre stage in the second act, a stylistic use of lighting highlights each of its nooks and crannies alongside its elegance. My inner forgotten art student was very excited by this.

Verdict: If you like Shakespeare, watch this and if you don’t like Shakespeare, definitely give this a go. You may leave as pleasantly surprised as I was and if you’re still anti-Shakespeare at least you’ll have had a good laugh. P.S. following this matinee performances may well be the shout.

Twelfth Night is on until May 20th.